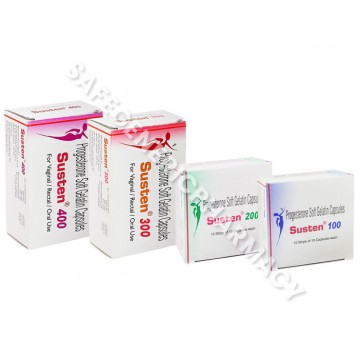 What Are Susten Capsules?

Susten capsules belong to a group of medications called Progestin. This medicine is a composition of Progesterone.This medication is used as a kind of hormone replacement therapy. When a woman body does not produce enough progesterone, it is administered as a replacement of the hormone and induces some changes in endometrium and decreases the level of oestrogen in the uterus.

It helps in overcoming menstrual disorders in women and reduces the risk of cancer of the uterus.

It can also be used as contraception.

A low Progesterone level of the body

It is used in the treatment of a condition where progesterone level in the body is alarmingly low, and therefore, the chances of miscarriage are quite high. The capsule is used as the replacement of the hormone.

When in the woman body, the female sex hormones are not properly balanced and heavy bleeding or irregular bleeding between periods happen frequently, this is used to treat such condition of the patient.

Abnormal bleeding with uterine due to hormonal dysfunction

This medicine is used when abnormal bleeding from the vagina happens as the result of low levels of the hormone with pregnancy or miscarriage. It works as a proper remedy for the condition.

This medication is used to treat the absence of menstruation in women due to lack of progesterone in their body although they have childbearing potential.

In premenstrual phase, when woman body goes through the changes in sex hormone levels as a part of the menstrual cycle, some complications emerge due to that. This capsule is used to treat those symptoms.

As for contraception This medicine may also be used as contraception vaginally which is administered in the form of inserted dosage.

How Do Susten 100mg tablets Work?

Progesterone works by binding itself to the progesterone and oestrogen receptors. Its primary target cells are the female reproductive tract, the hypothalamus, the mammary gland and the pituitary gland. After the binding to the receptor, progesterone starts slowing the frequency of release of gonadotropin-releasing hormone (GnRH) from the hypothalamus and blunt the surge of preovulatory luteinizing hormone (LH).

Progesterone is essential for the development of decidual tissue and is important in the increase of endometrial receptivity which is essential for implantation of an embryo. When an embryo is implanted, progesterone works to maintain the pregnancy. Progesterone has a great role also in the growth of mammary alveolar tissue. It also helps in relaxing uterine smooth muscles.

The proper information about how long does it last is printed on the capsule box or the capsule strip.

You should always consume the medicine in the dose and duration as advised by your doctor. You must swallow the capsule as a whole and should not chew, crush or break it while consuming Susten,

It could be taken with or without food as you are advised by your doctor and you should always take it at a fixed time of a day. You may opt for marking the schedule of taking the drug in the calendar of your room so that you can remember your time of taking the dose by watching that and avoid missing the dose.

What is the dosage of Susten 200mg capsule?

Usually, the recommended dose of this capsule is one capsule per day which is preferred to be taken at bedtime. But it may vary from person to person and can depend upon the condition of each patient. Therefore you are always advised to discuss everything with your doctor and follow his/her advice strictly regarding your dose of the drug. If you are pregnant, you will not be initially recommended to take the drug unless your doctor decides the necessity of the drug for you even in that stage. In that case, you must be very careful to follow the recommended dose for you by your doctor. Any mistake can be quite detrimental to you in such a condition.

If by any means, you have missed a scheduled dose of the drug, you must go for taking the medication at the earliest possible time. But before taking the missed dose, you will have to find out whether twelve hours have passed from the scheduled time or not. You can take the drug within twelve hours. But if the period is already over you should skip it and go for the next dose.

If you miss more than one dose, you must consult your doctor and follow his/her advice.

If you have consumed an overdose of the drug, immediately consult your doctor and follow the recommended instructions strictly.

What are the side effects of Susten 400mg capsule?

In the course of taking the drug, this medicine can cause some unwanted effects as well. If any of such reactions occurred, contact your doctor immediately and follow strictly whatever advice is given to you. As per the expert's Reviews, the side effects of Susten 400mg capsule are as follows

You should not take this capsule if you are allergic to the component of the medicine. You must also report your doctor if you have a heart or liver disorder.

If you have experienced a miscarriage or suffering from abnormal vaginal bleeding, you should not take medicine.

You should also never consume the drug if you are pregnant or have breast cancer. This medicine is not recommended for children.

Some other medicines like insulin, carbamazepine, ketoconazole, venetoclax, edoxaban, etc. can interact with Susten. Therefore, you must tell your doctor if you are taking any of those medicines.

This medicine is not recommended for use if you have a known history of Progesterone or any other component present in the dosage form.

This medicine is not recommended for use in pregnant women. Appropriate contraception should be used to avoid getting pregnant during treatment with this medicine. Contact your doctor and discuss the risks if pregnancy is suspected.

This medicine is not recommended for use in breastfeeding women unless necessary. All the risks and benefits should be discussed with the doctor before using this medicine.

How many substitutes are available for Susten 300mg capsule?

Some substitutes available which are as follows

Should Susten Capsule be taken during pregnancy?

Usually, it is not advised to take during pregnancy. But if you have an urgent requirement of the drug, your doctor will take the final decision.

Is it safe in lactation?

It is not safe for the lactating mother as the medicine can pass through with the breast milk and can do harm the baby.